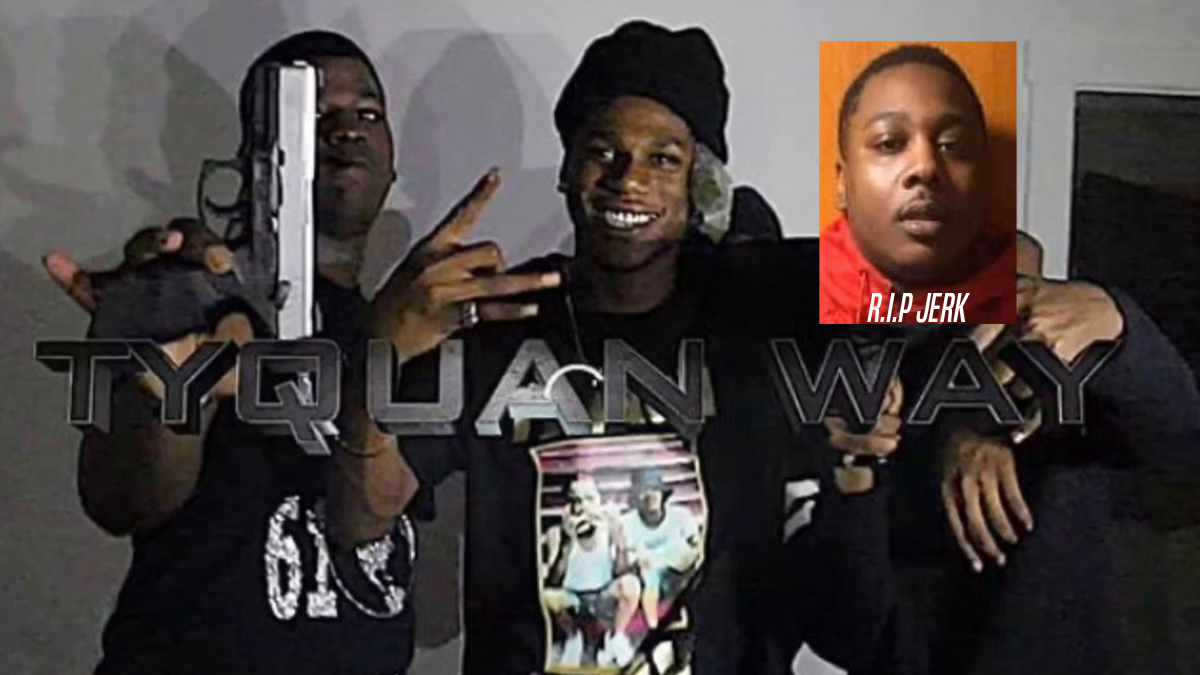 Drill fans received sad news on May 7, when it came out that rapper Malik “Richie Jerk” Delphie was shot and killed while driving, crashing his car in the process. Richie Jerk is known for being the blood brother of successful Chicago rapper Billionaire Black (real name Latice Delphie) and also for his less-than-serious stint with rapping. While part of local Chicago gang “Tyquan Way”, Richie had a reputation for his involvement in an underground single and music video named aptly for their affiliation: “Tyquan Way” was a slapper that checked every box for 2017-era drill and took the city by storm. It is now sitting at 1.2 million views on YouTube, and many consider the effort to be timeless. This is the most tragic tale of “Tyquan Way”.

In early 2017, YouTuber TURKTHETEC uploaded “Tyquan Way”, a drill music video by Sherrod “Poppie” Rhyme, Terry “TB” Barry, and Malik “Richie Jerk” Delphie. A repetitive, jingle-like melody fades in, as does the video which takes place in a dark house and front yard. The atmosphere is most sinister as the screen fills with firearms and gang slang t-shirts. Within seconds TB is confidently ad-libbing even more of it to open the first verse. The song has no hook, all three rappers proceed to belt out sizable chunks of rhyme-power back-to-back. If you aren’t accustomed to the culture however, chances are you won’t understand most of what they are saying.

The Southern-Chicago gang “TW” or “Tyquan Way” got it’s name after the murder of a 13-year-old innocent bystander, Tyquan Tyler. While attending a party in Woodlawn, Tyquan was the victim of stray bullets as gunmen blindly opened fire into a crowd over gang issues. Before two men were eventually charged with his murder, the particular neighborhood that he was from adopted the name “Tyquan Way” in his honor (now mostly referred to as just “TW”).

Historically, the root affiliations of the TW set are those of Folk nation / Gangster Disciple origin. The figures involved in this set and it’s allies have publicly been mortal enemies with Black Disciple rappers like Chief Keef, Lil Durk, and more recently King Von. These beefs extend into the streets and date back almost a decade, stemming from the dropped bodies of beloved gang cohorts. The tension is made painfully obvious in Chicago drill music: Artists from both sides lyrically tear down their rivals in the most disrespectful ways. The names of the dead are brought up and in-dignified, and those that are still living are tirelessly threatened.

Rapped by TB on “Tyquan Way“

Rapped by Richie Jerk on “Tyquan Way“. Richie mentions “opp” Lil Boo, who he refers to as “tire head” due to the fact that a bystander circulated a photo of murdered Lil Boo with his head resting against a car tire. Richie Jerk was boastful about the phrase he coined, which was heard many more times in drill music after “Tyquan Way”.

The lyrics to “Tyquan Way” provide a glimpse into the specific gang-related issues that TW are going through at the time. Most of their headache arises from the successes of Black Disciple rival sets that have been taking off in music for years. All three artists rap non-stop about shooting their guns and who is going to be at the receiving end. The grape vine will tell you that while Richie Jerk is a reputable name in Chicago, TB and Poppie were very well respected “hitters” for their sets. These men only rapped incidentally as a clout-capitalization.

In June of 2017, Poppie became the first of the “Tyquan Way” trio to be tragically killed. From Chicago HomicideWatch:

“Eighteen-year-old Sherrod Rhyme was killed on Friday afternoon in a Park Manor neighborhood drive-by shooting on the South Side.

About 3:15 p.m., Rhyme was standing outside in the 7000 block of South State when a dark-colored vehicle pulled up, according to Chicago Police and the Cook County medical examiner’s office.

A gunman got out of the vehicle and shot Rhyme in the head. He was taken to Stroger Hospital, where he died at 6:36 p.m., authorities said.

He lived in the Calumet Heights neighborhood.”

Like all of his partners, Poppie was almost definitely killed in an act of revenge (possibly directly).

TB, also known as “Bico”, was the second to be killed in October of 2017. Both Poppie and TB were murdered the same year that “Tyquan Way” was released. From Chicago Homicide Watch:

“A man who was killed in a shooting that left another man wounded last week in the South Shore neighborhood has been identified as 21-year-old Terry Tyee Mubarak Barry.

The shooting happened at 12:45 p.m. Tuesday in the 7000 block of South Chappel, according to Chicago Police.

Barry and a 24-year-old man were both shot in the head, according to police and the Cook County medical examiner’s office.

Barry, who lived nearby in the same neighborhood, was taken to Northwestern Memorial Hospital, where he was pronounced dead at 1:23 p.m., authorities said.”

After the death of Richie Jerk in 2020, there is nobody left from the certified Chicago drill classic “Tyquan Way”. Unfortunately, this is the tragic result of exactly the lifestyle and behavior that drill music is based on. The most views will stem from listener’s interest into the specific dramas and beefs coming up in these neighborhoods, and the artists know this and drive the antics further every year for it. Not to mention, these rappers are just three out of the literally countless that have lost their life while trying to capitalize on drill.