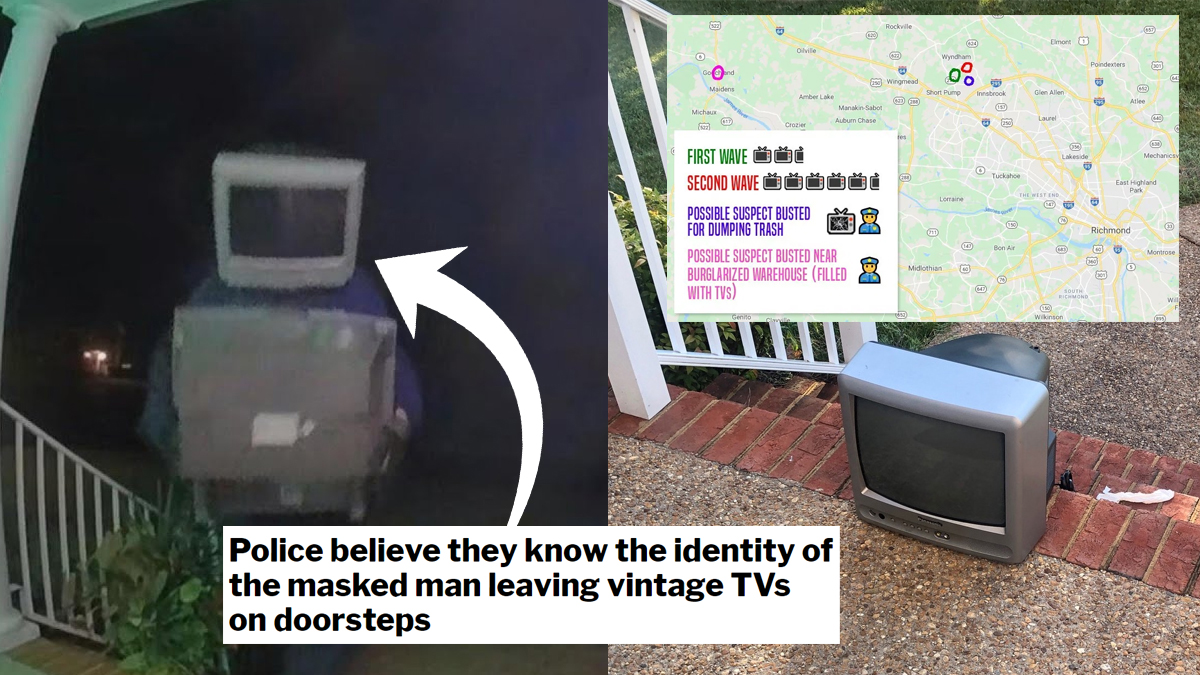 In the era of the Internet, the most regular of Joes are always in touch with anything significant happening. By glancing down at our social apps daily, we are tapping into an information super highway and cannot miss anything interesting or noteworthy. Many will argue the deficits of this new norm, but what’s undeniable is that authentic and quality campfire stories have become a huge industry. When small communities are hit with cases like the Richmond TV fairy, the 21st century sees it become an international story.

The First Wave of the Richmond TV Fairy

In August 2018, more than twenty people woke up with a television on their porch in the community of Glen Allen, Virginia (suburb of Richmond). Locals took to community Facebook groups to share of their bizarre morning and realized they were not alone.

“I was leaving for work this morning and I go out the garage door. As I pass through it looked like I had a package on the front door,” Robyn Schorr described. “I told my husband to get the package off the front door.”

“He took a picture of it and sent it to me and said, ‘Amazon must be getting lazy. Where did you want this?'” Schorr said. “It looks like a TV from back to the future.”

Schorr posted the picture on a Grey Oaks neighborhood discussion page where she found out she wasn’t the only victim.

“Apparently down the road they have lots of TVs delivered to their houses,” she stated. “People were calling them Trojan horses saying ‘Don’t put them inside your house. Who knows what can happen.'”

“I’m not really sure what would motivate someone would do it,” said Shelley Parker, who found a television on her steps. “It takes effort to lift those. They aren’t little light flat screen TVs.”

The Henrico County Police received a handful of memorable calls that morning. Despite that, it was never clear what was done about the random televisions. It seemed as if the overnight TV drops were an isolated incident.

The Second Wave of the Richmond TV Fairy

Almost exactly a year later, the Richmond TV Fairy struck again in Henrico County. This time, residents in the Hampshire neighborhood were affected. The ongoing popularity surge surrounding Ring cameras and similarities ensured that the culprit was caught on tape this time. With this evidence, the case became exponentially more strange.

Doorbell-camera footage appears to show the Richmond TV fairy wearing a television set as a helmet. In one piece of viral footage, the man slowly drops the TV off before waving at the camera. This time the police worked with Solid Waste Divisions to remove all of the TVs, which totaled up to more than 50. The TVs were obsolete and vintage – much like the first wave.

Michael Kroll spotted a TV set on his doorstep when he went to let his dogs outside.

“I thought my son brought it home, but apparently not,” Kroll said. “I think it’s just a prank.”

“They had way too much time on their hands if they had all these TVs and spread them all over the neighborhood,” Kroll said. “I think it’s funny in some ways… Now if my whole front yard was covered with TVs, I’d kind of get upset.”

Jim Brooksbank said he found an old, tube-style, 13-inch TV on his porch.

“It’s sort of funny… He wants to be known as the TV Santa Claus, I don’t know,” Brooksbank said. “I can’t think of any technology or political point that would be valid here. It’s just a senseless prank.”

The involved man became the prime suspect for the 2018 and 2019 TV deliveries. He was facing three charges: “dumping trash, trespassing, and felony wearing a mask in public”. Police also state that he could face 52 total charges of the latter if he is confirmed to be the culprit (for wearing the TV helmet). A search warrant was eventually executed at the suspect’s Twin Hickory house, but no evidence was recovered. As of May 2020, an arrest has never been made in the case of the Richmond TV fairy.

The Legacy of the Richmond TV Fairy

While the mystery is in the air, some readers of the viral news story have developed a fascination for the Virginia legend. One Tumblr account exists as a fan club for the Richmond TV fairy, including detailed artist depictions, GIFs, memes and more.

Watch the Original Footage (via Inside Edition):

This is Not Kodak – Impersonator LC Huncho is Taking Off

You might scroll right past him if you have seen enough Kodak for the day.