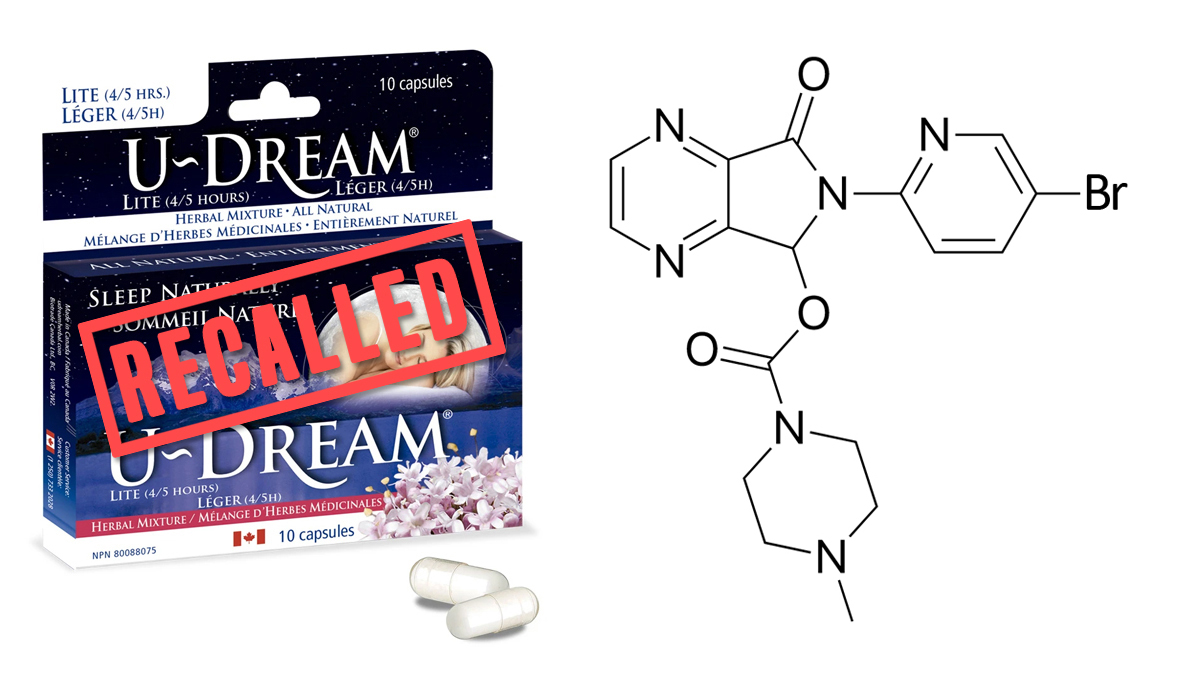 You might already know about the legal gray-area drugs sold in gas stations and on the internet, usually labeled “not for human consumption” and chemically similar to existing hard drugs. Examples of these include things like “Spice“, “Bath salts” and “Flakka“. These substances have long been a talking point in America, and they swing in and out of the public eye with each new controversial substance.

Aside from this, did you know that there have been plenty of companies selling unscheduled “research chemicals” as an unmentioned ingredient in over-the-counter supplements? These chemicals that find their way into legal blends are often drugs that address the issues the supplement is purported to assist with.

In December of 2019, news broke in Canada that a popular natural sleep product was investigated by Health Canada after more than one user suffered serious cardiac events on it, including one man who died and was revived. An investigation found that the supposedly “all natural” product contained the sedative herbs it advertised, as well as a chemical that Health Canada named “Zopiclone Impurity 22“. This chemical is structurally similar to existing sleeping drug Zopiclone, hence the name. On the day before Christmas Eve, all derivatives of “Udream Herbal” were recalled effective immediately.

Lunesta and Imovane / Zopiclone and Eszopiclone

Zopiclone is a popular anti-insomnia drug available outside of the U.S. as the prescription drug “Imovane”. In America, people are prescribed a well-known version of Zopiclone called Eszopiclone, which is branded “Lunesta” (and sometimes available generically). Zopiclone is classified as a “nonbenzodiazipene” drug, which are structurally distinct from benzodiazepines like Xanax and Valium.

This class of drugs is distinguished as such due to it’s effects, which are ironically very similar to those of benzodiazepines. These drugs work because they agonize certain GABA receptors in our brain, the receptors specifically responsible for regulating our anxiety and fear levels. Zopiclone is not as recreational as “benzos” but the potential is still there. It’s mechanism of action also causes it to be a very physically addictive drug.

What’s the Catch with “Zopiclone Impurity 22”?

“Zopiclone Impurity 22” is the official identifier for a virtually unknown chemical that has never been studied or marketed as a drug. It’s molecular formula is C17H17BrN6O3, while the formula for Zopiclone is C17H17ClN6O3. Eszopiclone and Zopiclone share the same formula but differ structurally by a single bonding point. The main difference seen in “Zopiclone Impurity 22” is that a single Chlorine atom is replaced with Bromine.

Although a small change to a chemical can sometimes drastically change it’s properties, it seems as if the pharmacological action of this chemical is almost the same as it’s parent.

While it was available, the U-Dream brand was selling one of the most popular and demanded sleep products you can buy in Canada. Reviews of it tout it constantly as being the best thing you can buy for sleep. Some anecdotes describe absolutely desperate users had tried countless products (including prescription drugs) and had no success until they found U-Dream.

The U-Dream website now contains an official statement on the news. They address the product being made illegal overnight Canada-wide, and deny the intentional addition of “Zopiclone Impurity 22”. They state that they are eager to get their product back on the market and are cooperating with Health Canada to the fullest. One has to wonder if the new version of the product will be even a tenth as effective without the magic Zopiclone-like ingredient.