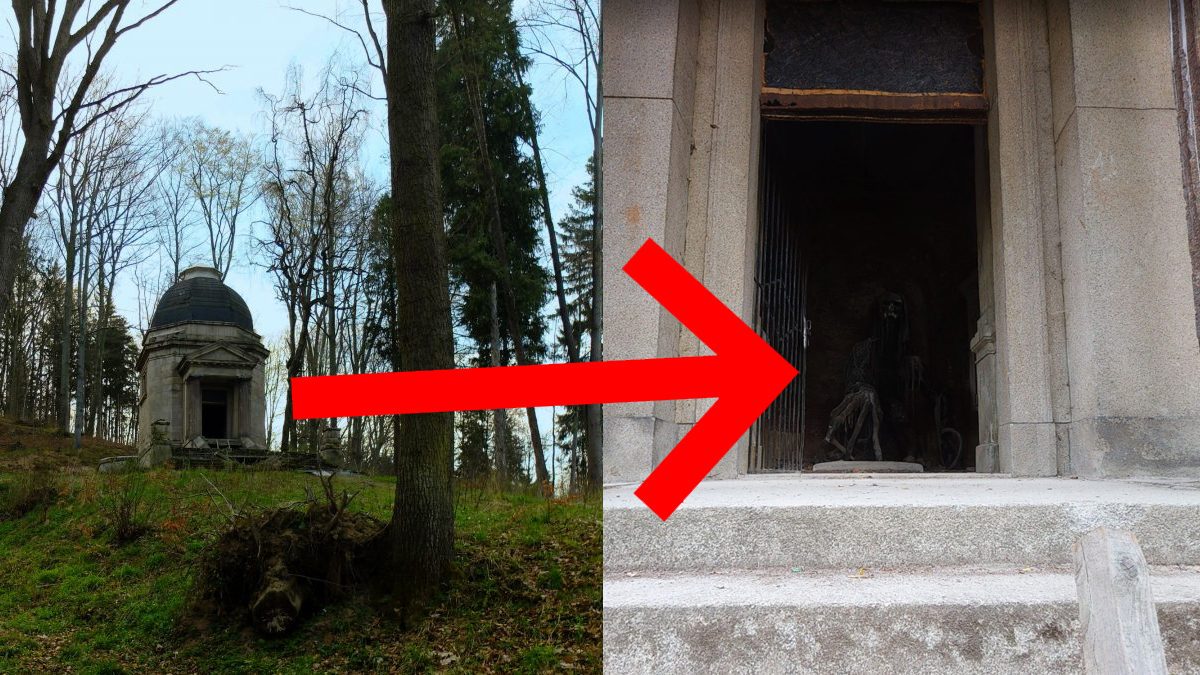 After a small horror film in Poland called “Redwood” wrapped up, one particular “structurally abstract” prop for the movie had nowhere to go. This debacle in 2016 would be responsible for a very popular local attraction, one that arguably had the shortest legacy of any of Earth’s known spooky places. In a publicly accessible park in Poland, locals could venture to a somewhat remote forest area and find a small mausoleum (in disrepair) with more than a century of history.

Upon entrance between 2016 and 2019, one was confronted by an abandoned monster statue. The set and setting are the perfect mix for a truly eerie sight.

The Destruction of the Abandoned Polish Monster

Since its erection four years ago, it only took one year for visitors to begin destroying the statue. In 2017, vandals destroyed and toppled over most of the statue, one that is basically irreparable by nature.

“The mausoleum and the tower fell into disrepair over the years, fortunately there were people who decided to save the park facilities. They inform about their activities on the Facebook page Forgotten Palace and Maciejowa Park . Thanks to their involvement, the park alleys were marked, the area around the tower was tidy, and the mausoleum was given a new roof.

There used to be a marble statue of Christ in the tomb, which was transferred to the local church. Since 2016, … a monster has been sitting in the mausoleum: a reminder of the film Redwood recorded in Maciejowa . However, not everyone liked the monster. Last year it was destroyed, even though the entrance to the mausoleum was secured with a grating. However, the elements of the destroyed monster were left inside the tomb.“

Rough translation of a blog article on http://tropografie.blogspot.com/ (May 2018)

The Arson of the Abandoned Polish Monster

In 2019, vandals further destroyed the “Redwood” statue, this time for good. Someone had set it alight and completely burned up any semblance of its structure aside from its distinct face.

We regret to inform you that on Monday (5.08) unknown perpetrators devastated and then burned our park monster. Apart from the drastic act of vandalism, a huge risk of fire was created not only in the mausoleum, but also in the entire park. We know from witnesses that the fire brigade took part in the firefighting operation – said Paweł Gromadzki, who has been taking care of the forgotten park in Maciejowa for several years in a community effort. – Quoting Cpt. Wagner: “There are no words in the dictionary of cultural people that could abusively describe your actions” – added the perpetrator of many initiatives reminding about the history of the park in Maciejowa.

A roughly translated statement from Maciejowa Park owners regarding the “Redwood” statue being burned and destroyed in August 2019. [via Jelonka.com]

You can see the sight for yourself on Google Maps, which still contains plenty of photos from its lifetime.