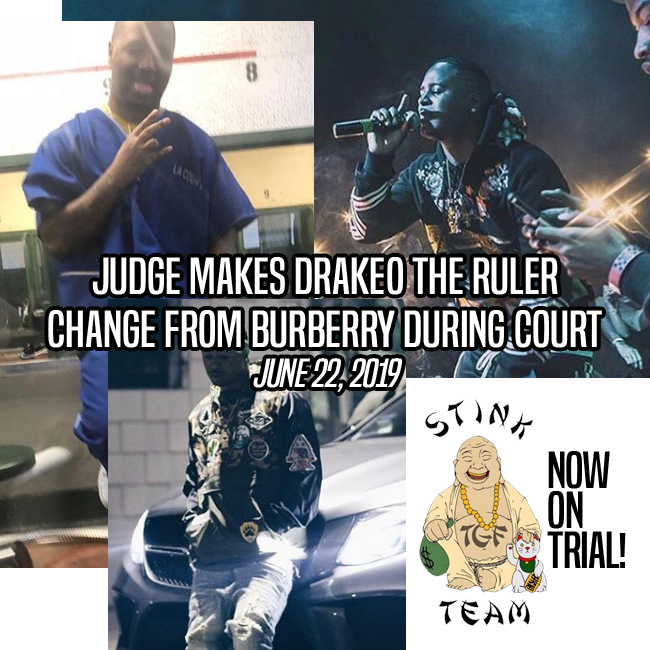 California rap superstar Darrell “Drakeo the Ruler” Caldwell has been on trial for a while now fighting murder charges stemming from an incident in 2016 where LAPD claim he hired people (including Kellz from the Stinc Team) to shoot and kill rapper Rodney “RJ” Brown in Los Angeles. He is fighting not only the charges of murder (after bystander Davion Gregory was killed), but also attempted murder and multiple counts of conspiracy. Even RJ denies what the police are saying, stating that the shooting occurred at an event that RJ was not on the flyer for nor attending. According to someone who knows him closely and talks to him during his incarceration (in this No Jumper interview), he had court proceedings stopped in order to change from a Burberry shirt he was wearing. The source says he was also wearing Mason Margiela shoes in court.

Usually inmates in LA’s Men’s Central Jail are escorted to court in various jumpers / jail-wear, but Drakeo’s manager TK Kimbro says that he was able to make it because “he is the Ruler.” The judge made him change out of the shirt.

Checkout some of these insider scoops from Jeff Weiss on why the circumstances of the case make it entirely seem like it is targeted work by the LAPD and the result of them tugging legal strings:

“In the District Attorney’s rendering of that night, Drakeo, Boyd and Buchanan went to a “Naughty or Nice Pajama Jam” at a warehouse party in Carson to lie in wait for RJ. However, the D.A. claims that RJ never showed up and around 11:30 p.m., Buchanan killed a 24-year old alleged gang member named Davion Gregory, wounding two others in the shooting. According to police, the shooting came from a Red Mercedes that they allege was owned by Drakeo. Yet Drakeo’s Mercedes is black.”

“It’s ridiculous,” says Drakeo’s attorney, Frank Duncan. “This case is absurdly overfiled and we have every reason to believe the charges are being brought against him as a result of his fame. We have an excellent chance of winning.”

“According to Duncan, most of the prosecution’s case rests on jailhouse informants who are snitching on Drakeo as a way of either earning a reduced sentence—or possibly getting revenge on a rapper who has turned talking shit into an art form rarely seen since the peak of Killa Cam.”

Check out more on Jeff Weiss‘ interview with Drakeo.

Drakeo is the face of a clique of very wealthy young men, many of whom are rappers, known as the Stinc Team. In what was essentially a sweep, almost the entirety of the Stinc Team was indicted or arrested on a variety of charges after Drakeo was initially indicted with the murder while already behind the walls. Devante “Ralfy the Plug” Caldwell is the biological brother of Drakeo and is also in jail, being basically the co-head of the Stinc Team. Other members include Ketchy the Great and Bambino. Checkout some of Drakeo The Rulers best music (all views are as of June 22, 2019):

Notes: “Flex Freestyle” contains two lyrics pertaining to RJ, one of them being “…with RJ tied up in the back”. The prosecution is using this as evidence in the murder trial. More: